Welcome! I’m guessing you’re here because someone said ‘no’ to you recently.

And now you’re sitting there (or standing, or pacing) and thinking, ‘What now?’ No matter the vibe, hearing a ‘no’ can be really fucking hard.

Here’s the situation. You have a ‘no’. Now it’s your job to decide what you want to do with it.

You might be thinking ‘What the fuck would a young (ish) woman know about rejection?’ Truth is, I’ve experienced quite a lot of this stuff.  I’ve been rejected for not being conventionally attractive enough. Sometimes it’s because I’m socially awkward – when I work up the courage to ask someone out, they back away as though I’m contagious! I’ve been rejected for being a sex worker, because sometimes guys get uncomfortable with chicks who sleep around. I’ve been rejected because, well….as soon as I see someone I like, I usually tell them. And that can sometimes come across a little creepy. Yep. Even girls can be creepy…

So, back to the ‘no.’ You have four options.

Self-blame is the standard-issue emergency package – it’s a universal human reaction to adversity. Whether you’ve just lost your job, lost your girlfriend, or been graded C- on your last exam, the immediate inclination is to tell ourselves we’re not good enough.

Shame (and its younger cousin, Embarrassment) are especially common when we’re trying to chat people up, pick up, or ask someone out. There’s this idea that, when it comes to sex, we’re supposed to be mind-readers, capable of magically knowing the perfect stuff to do and say to win someone over. If you get it wrong – horror! ‘You should have known better!’

Except, we’re not mind-readers. And because everyone is different, it’s impossible to know for sure what other people want and need. Think that girl in your class might want to date you? You don’t know till you ask. Reckon your friend on Facebook chat is getting flirty? Maybe…but it’s hard to interpret a text-based DM, and unless you check with them, you might not know for sure.

Getting a ‘no’ doesn’t necessarily mean you did anything wrong. Often the ‘no’ is for reasons completely out of our control. Maybe the object of your affection already has a partner. Maybe they have something stressful on their mind and aren’t looking to get laid. Maybe the chemistry just isn’t right. This stuff isn’t obvious – and like I said, we’re not mind readers.

If you blame yourself every time you experience rejection, you’re going to end up psychologically hamstrung, unable to put yourself out there for fear of being turned down.

It’s a shit way to live, and it can have a really detrimental effect on your sex life – folks smell shame and fear a mile off! Don’t be that person who gets so down on themselves, that they start freaking everyone out. You (and your potential future hook-ups) deserve better.

2. Blame the other person

Sometimes, when we feel bad about rejection, it’s easier to take all our bottled-up negativity and pour it on the other person, like a celebrity having an ice bucket dumped on their heads. It’s satisfying to get stuck into the person who’s hurt us, right? And if we can just convince ourselves that our feelings are the other person’s problem, it means we can walk away feeling righteous instead of dejected.

I have some bad news for you, though … our feelings are our own responsibility.

Rejection makes us feel bad because we already feel bad about ourselves. Yes – I’m sorry to say this, but all those shitty feelings aren’t the other person’s fault; they were already lurking in your head.

Think about it – if someone pulls up next to you at the traffic lights while you’re driving your Mustang and says, ‘Hey, your car is stupid,’ you’re not going to feel too bad, are you? But if a stranger wanders by on a day when you’ve just gotten a huge pimple on your face, and tells you you’re ugly, that’s a different story. Other people can only hurt our feelings if we’re already feeling bad about ourselves.

Telling someone else off because you feel bad about yourself is like hitting the wrong hole when you’re playing whack-a-mole; it doesn’t fix the problem. And although it might distract you from your self-blame, it’s a liability. When we take out our feelings on others, things can escalate quickly … it may end with you being blocked, dumped, or (in some cases) arrested.

And when it’s all over, you won’t have gained anything positive from the experience. All those shitty feelings will still be right there in your brain. You’re back where you started.

If you ignore a ‘no’ and push ahead anyway, you’re taking an express ride into the asshole zone.

Sometimes we don’t want to acknowledge other people’s boundaries – it’s inconvenient or awkward, so we feel it might be easier just to pretend we didn’t hear them. But when you ignore a ‘no,’ you’re hurting someone else. This is the case whether it’s a small request (‘please don’t come to my house without calling first’) or a big one (‘I don’t want to have sex with you.’) When we treat people as if their feelings don’t matter, it fucks them up…and this means they’re less likely to trust anyone in the future. Not great.

And another thing…people who fuck others over start to get a certain vibe, after a while – that shit sticks. Potential partners will smell it on you.

Being an asshole makes picking up harder for everyone.

4. Use it as a learning experience

The way I see it, life is one big sandpit. We fall down, we get up. We stub our toes, get sand in our eyes. Life is messy and complicated, and we all get it wrong sometimes. Accepting a ‘no’ with style is essential, if you want a successful sex life.

It’s impossible to be perfect – as I said, we’re not mind-readers, and rejection is inevitable from time to time. But there is a way to increase your success when it comes to sex and dating, and that is to react constructively to feedback from others.

Imagine you were a Navy Seal, about to direct your team to jump out of an airplane at 15,000 feet. You turn to your second-in-command and say, ‘Captain, are you ready?’

What would you do at this point? Throw a tantrum? Get depressed because things weren’t going your way? Not if you were a real soldier. You’d listen, nod, and say, “Roger that. Tell me when we’re ready to proceed.”

When we see a ‘no’ as useful information, rather than a damning judgement, it suddenly becomes something we can use. A ‘no’ gives you information you NEED about the other person – perhaps there’s something else they need from you, to feel safe enough to go further. Perhaps they’re not the right person, and you’re wasting your time by hanging around. Perhaps you’ve picked a time or an approach that doesn’t work very well, and you’ll be able to adjust your tactics for next time.

When someone tells me ‘no,’ I make it clear that I’ve understood:

“Okay, thanks for your honesty.”

“I hear you, appreciate the feedback.”

Then I walk away. The best thing about acknowledging the ‘no’ is that doing so makes it look like you have your shit together. You’re strong enough to accept rejection, without losing your shit. People respect that – even if they’re not right for you, you’ll get a lot of kudos just for acting like an adult.

Who cares if you go home, eat a tub of ice-cream and cry for an hour? It’s okay to feel down when you’re rejected. The important thing is showing that you listen to and respect others – in short, being an awesome human being.

When I date (or fuck) someone, I need to be with people who are good at hearing ‘no.’ It’s not just about turning down a date, or turning down sex … no matter what we’re doing together (picking a movie, ordering takeaway, buying kink toys at Club X) I need to know that my feelings will be listened to. When my partners are willing to respect my needs, it means I’m free to ask for what I want (and speak up when there’s something I don’t want). In my opinion, folks who are good at hearing ‘no’ are the best option, for both relationships and one-night stands.

I’m not the only one who feels this way. If you listen to and respect the wishes of others, you’re going to come across as much more dateable (and fuckable).

So, there you have it! Rejection sucks, but it happens to all of us. The better you are at accepting a ‘no’, the more successful your love life is gonna be.

* I don’t know how to fly a plane, nor have I been in the army. So this scene could be factually inaccurate.

Podcast Episode 15: Being your own sex coach, with Nat from That Bitch

Does your sex life need a makeover? Nat Cee from That Bitch talks about how to be your own sex coach. 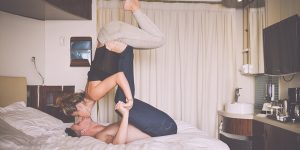 When it comes to sex, ‘normal’ is bullshit.

Why does everyone worry about what’s normal in the bedroom? We’re all different – and trying to fit in can totally wreck your sex life.